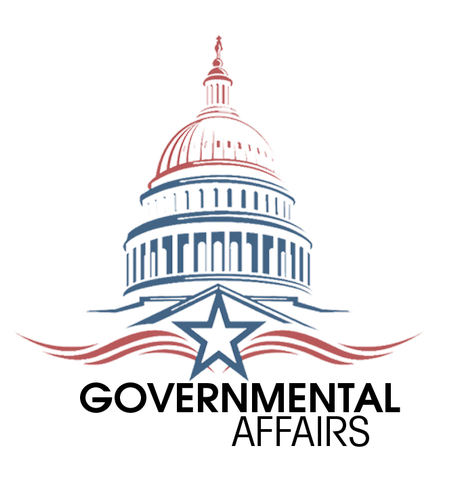 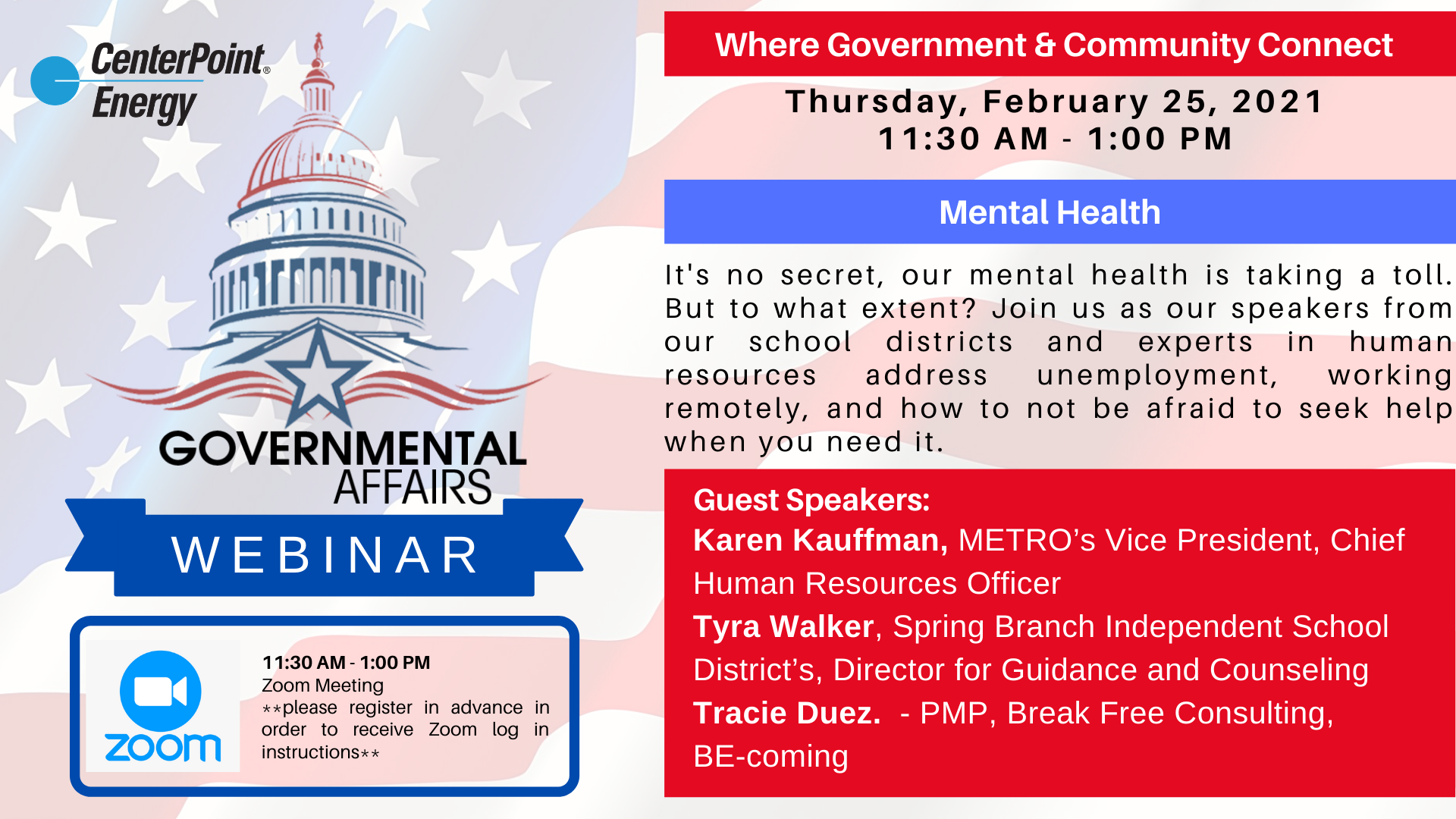 The purpose of Governmental Affairs is to provide leadership and support on governmental and legislative issues that may affect HWCOC member businesses. To promote member understanding of local, state, and national policy issues that affect business. To develop policy statements of Chamber positions on those issues and to communicate them to our members, elected officials, and the larger community. To facilitate interaction between elected officials and Chamber members. To advocate on behalf of members for responsible governmental policies that promote economic growth and development in the region. 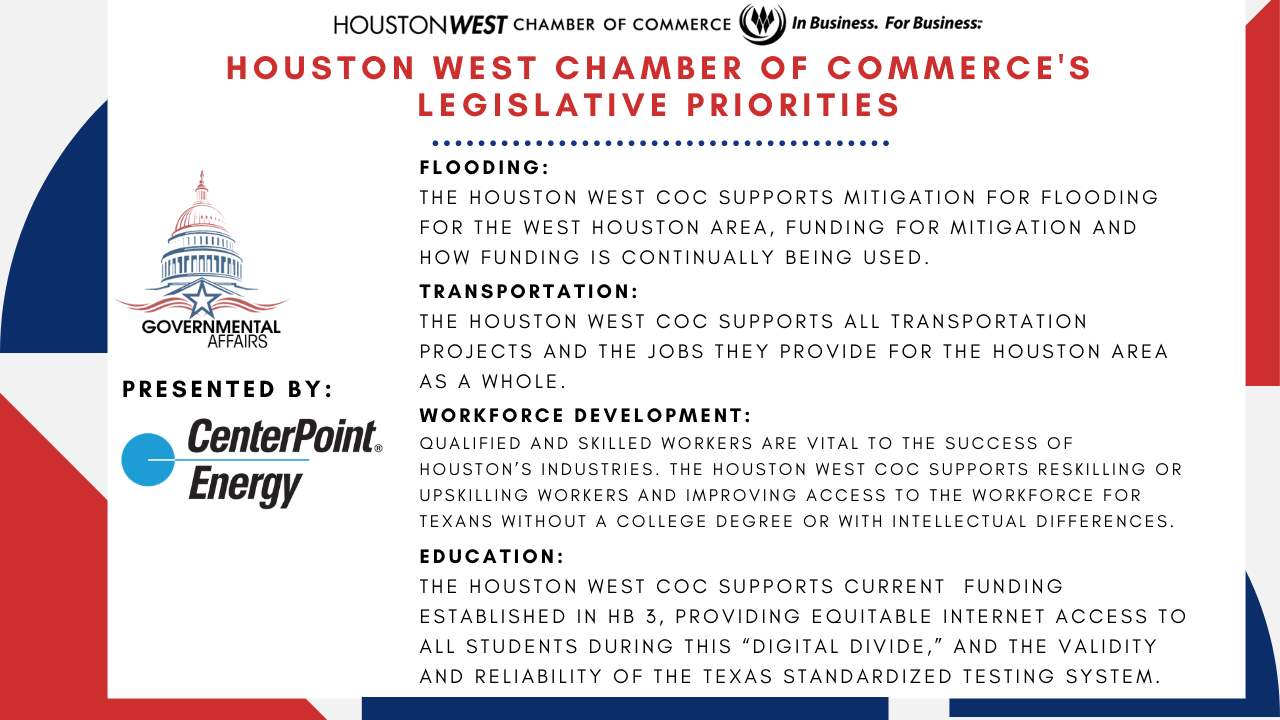 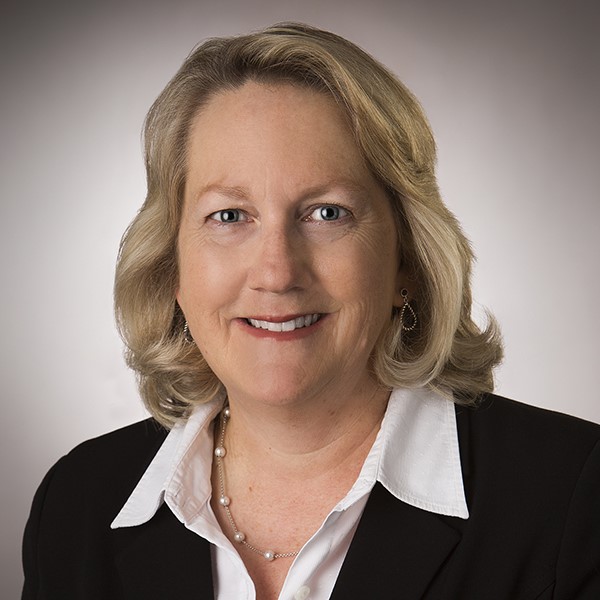 Karen Kauffman is the Vice President/Chief Human Resources Officer for the Metropolitan Transit Authority (METRO). In this role, she has leadership responsibilities for the human resources function for over 4,000 non-union and union employees.

Karen joined METRO in 2003 and has held various leadership positions in the Human Resources and Compliance departments. She leads the development and oversight of METRO's EEO/Affirmative Action Program and plays an active role in supporting METRO's diversity and inclusion efforts. Her additional responsibilities as Chief Human Resources Officer include leading the following divisions within the HR Department: Diversity; Staffing; Compensation; Benefits, Pension & Wellness; Labor Relations; Employee Relations; EEO; Organization Development; and HRIS. She also has oversight responsibilities for the Title VI and VII regulatory requirements for METRO's Compliance programs.

Prior to joining METRO, Karen had extensive human resources and business experience in leadership roles for a variety of industries including manufacturing, real estate development, oil and gas, financial, and education. She also taught corporate business courses at the University of Houston and served as a corporate consultant in Houston and Oklahoma City.

She is actively involved in the community and is a member of several professional organizations, including SHRM (Society for Human Resource Management); HR Houston; and ATD (Association for Talent Development). Karen is also involved with the Houston Food Bank. 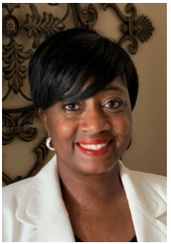 Tyra Walker is the Director of Counseling and Student Support for Spring Branch Independent School District. In her 27+ years year in education, she has performed a variety of leadership roles supporting students and staff in the public education system.

Tyra began her career in 1994 as a Residential Treatment Supervisor at The Behavior Training Research Center where she taught behavioral adjustment and replacement behaviors to children and adolescents. Concurrently, she also worked for Alvin ISD as a teacher for students with severe social- emotional needs which exceeded the accommodations offered in a public education setting.

Upon leaving the residential setting, Tyra began teaching in Aldine ISD where she taught English to 7th and 8th grade students with learning and behavior exceptionalities. She began her career in Counseling in the Alief Independent School District at the Elsik 9th Grade Center, during which she served as a District Staff Development Facilitator, Lead Counselor and Prevention Program Coordinator for 8 years. She then served as an Assistant Principal at Hastings High School, where she supervised the English and Social Studies departments and managed student support for approximately 500 students. Tyra’s instructional support and development of teachers lead to her pursuing the role of Associate Principal of Instruction where she was responsible for the oversight of 3 Assistant Principals, 2 instructional specialists, approximately 125 teachers and 1500-1600 students.

When the opportunity to oversee Counseling for the Alief district was presented, Tyra left the campus to take on the challenges associated with providing leadership over the academic, social-emotional, mental health and postsecondary needs of 46,000 students across the district. As Director of Counseling and Student Support in Spring Branch Independent School District, she has continued leading the Guidance and Counseling division, but she also supervises the System of Care team, which provides a multi-tiered system of supports (MTSS) for students with behavioral needs.

Tyra’s experience has been in both the K-12 education system and residential treatment setting. Both institutions have provided Tyra with rich experiences and encounters. Her journey in education has afforded her the opportunity to grow as a leader, but the skills developed in her counseling program, job experiences, and professional development have been instrumental in helping her be an effective and valuable resource for the students, staff and families she serves. 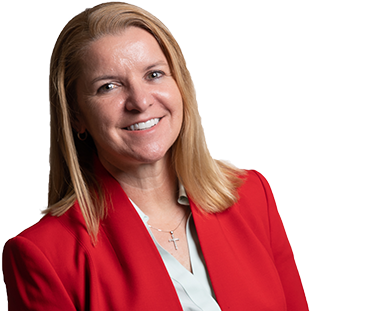 After graduating from Case Western Reserve University with a bachelor’s degree in Chemistry and a minor concentration in Sports Medicine, Traci continued her education at The Ohio State University. There she entered the master’s program in physical education specializing in Athletic Coaching and Sports Psychology.

Today Traci is an accomplished and sought-after speaker. She has spoken at over 100 events in the last 4 years including international locations such as Trinidad, Canada, and Amsterdam. She is highly recommended for her speaking, coaching and leadership development workshops as evidenced by over 100 recommendations posted on her LinkedIn profile and a five star rating from over 80 recommendations posted at Genbook.com.

Prior to beginning Break Free Consulting, Traci worked for 20+ years in various roles from medical technologist to laboratory informatics specialist; from project manager to director of an IT consulting firm. A short list of her achievements includes:

· Self-taught in medical technology, Traci demonstrated her expertise in the subject by passing the ASCP (American Society of Clinical Pathologists) certification examination.

· Always an innovative thinker, she initiated a new laboratory that utilized robots and computers to perform analytical tests. This saved the company over $250,000 annually in reagent use alone.

· Her ability to lead a project of cross-functional teams reporting up through different management structures was key to the successful implementation of a state-of-the-art laboratory information management system.

· As an IT consultant, Traci was able to successfully lead a diverse project team of 50 people from 14 different locations around the world including the US, Puerto Rico, England, Italy, Ireland, and Australia.

· Throughout her IT consulting career, being able to quickly and accurately assess her team’s capabilities allowed her to place the right people in the right roles at the right times and help both the company and consultants succeed.

· As an executive consultant, she played many roles from program manager to inside sales support. She initiated employee development programs and helped create a new organizational management structure.

· To meet her client’s goals, she has successfully collaborated with corporate leaders (CEO’s, CFO’s, CIO’s, COO’s, President’s and VP’s) in the domains of pharmaceutical manufacturing, biotechnology, chemical processing, food processing, insurance, oil and gas, utilities, sales, IT and management consulting.

In her spare time, Traci has volunteered for various coaching, leadership, and mentoring roles including:

· While attending CWRU in Cleveland, OH, Traci participated as a volunteer in the children’s hospice area of Rainbow Babies’ and Children’s Hospital where she worked/played with chronically and terminally ill children.

· She coached basketball at the high school and collegiate levels where she successfully led teams to achieve more than they believed they were possible of achieving. At Columbus (OH) Academy, she led the varsity girls’ basketball team that had a 4-13 record the previous year, to a 13-7 record.

· In Orlando, FL, as the youth pastor for a community church she implemented student-led home groups that not only grew the student ministry from 15 members to over 40, but also grew student leaders.

· Currently, Traci is an active Little League umpire where she receives recognition for her excellent demeanor, field presence, and leadership ability.

· Traci is also a volunteer for the Texas Scholars program that encourages 8th grade students to build a solid academic foundation as they select their high school curriculum.